The allure of VW camper vans

The allure of VW camper vans

“Volkswagen Campervans are undoubtedly the Marmite of the motor world” states Charnock (2011) suggesting that merely a glance can provoke a strong positive or negative reaction, but never ambivalence.  Bright colours, curves to swoon for and “cute little curtains” are highlighted as visually appealing attributes.  To those of a certain generation the recollection may include iconic seventies associations such as Dylan, Kerouac, Woodstock, Peace and marijuana.  Alternatively, it might provoke a grimace, distain of the garish colouration, dislike of the patterned curtains and distinctively spherical shapes.  Enduringly associated with hippie and surf culture (Camper Van Life, 2012) VW camper vans possess an unusual, yet iconic and popular status. 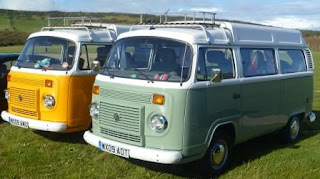 Born as a multi-functional, utilitarian vehicle in post-war “even the oldest vans are practical, but they need more care and servicing than a modern car. The air-cooled engines in Splitties and Bays sound charismatic, but they’re thirsty and slow. The cab can be drafty, the steering is heavy, and you don’t so much use the brakes as make appointments with them weeks in advance.”  (Handby, 2010)

Camper Van Life (2012) notes that “VW campers have become popular culture icons throughout the world particularly in , , and .”   Wallace (2009) “There’s a hugely influential and incredibly popular scene surrounding ageing VWs in the and secondhand values in recent years for restored and solid buses has literally spiralled out of all control.”  There is some irony in noting that a mass market, functional, flexible vehicle, successful over decades because of its afforability, should be reapproriated in such a manner.


You might wonder why this should matter ?  Why would a successful global brand like Volkswagen be interested in heritage clubs ? What commercial benefit can they derive from vehicles manufactured in the 1960's and 1970's ?  The youtube clip above shows a 2011 VW commercial advertising spot entitled "60 years of man and van" that heavily features a pristine split windscreen camper.  Nostalgia, reliability, iconic design, loyalty, durability, passion and beauty might be ideas these images are seeking to evoke.  Cynics might point to a hinted at but not confirmed relaunch of the model under its orginal German name 'Bulli'.

justin.obrien@rhul.ac.uk is currently undertaking research into the allure of the VW camper van, to appreciate its attraction, its iconic cultural significance and to better understand 'the scene' from a conceptual perspecitve.  If you are interested in VW camper vans, have owned one or currently own one and wish to be part of this research, please get in touch.
Posted by Just at 09:09 4 comments:

Recently the BBC and British Museum collaborated on a major work entitled History of the World in 100 Objects. In similar spirit we might consider the piano as the marketing object par excellence that might facilitate an exploration of the History of Marketing in One Object. Just as the malevolent spirit invoked by the Rolling Stones’ Sympathy For the Devil managed to magically supplant himself wherever world history unfurled, so too the piano was there giving rise to, materialising, reflecting, embodying and objectifying transformations of consumer culture and marketing practices. Apart from a continuous stream of design innovations to develop new market segments and feed aspirational dreams, the marketing of the piano was also characterised by early forms of branding (to combat a burgeoning counterfeit market), celebrity endorsement and consumer credit schemes.

Emerging from what is arguably the foundational point of western consumer culture, the pianoforte arrives in late 17th century from the Medici house in Florence and heralds a new era of music for the masses and middle classes. The pianoforte, with its new dynamic range, allows for a single performer to arrive at new possibilities in polyphonic ranges, merges harmony and melody and allows a new type of music listener, a new type of musical listening and performing experience to emerge. As the romantic era commences, the piano musically realises the new ethic with new possibilities for a virtuoso performer to perform with power and drama but also with great subtlety. And when the industrial revolution arrives and the new domestic middle class home materialises, what is a centre point? The piano; that staple of bourgeoisie aspirations, that object for houses and apartments to be built around and that disciplining unit for children to learn polite subjectivities. As modernity mutates into postmodernity and we enter the age of the simulacra, the piano too is the first instrument to lose its materiality as it becomes sampled and transformed through the development of midi technology and survives today in its post-piano condition.

Posted by Alan Bradshaw at 02:06 No comments: