Should Advertising Be Banned for What it Doesn't Say? 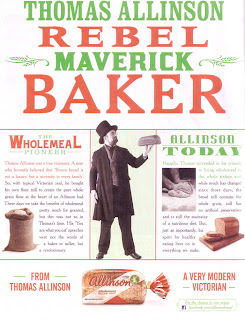 This press ad, for Allinson's bread, has been the subject of a complaint from a food pressure group called the Real Bread Campaign (RBC). The RBC asked the advertising regulator, the Advertising Standards Authority (ASA), to ban it on the grounds that it misleadingly implied that Allinson's bread is still made using Victorian production methods. They asked me to comment to support their case, in this press release http://www.sustainweb.org/news/sep12_real_bread_allinson/

The ASA rejected the complaint, and their reasons are here: http://www.asa.org.uk/ASA-action/Adjudications/2012/9/ABF-Grain-Products-Ltd/SHP_ADJ_195239.aspx

Today (September the 19th) the topic has begun to garner some coverage in the marketing trade press, and a quote from me is included in this Campaign magazine feature http://www.campaignlive.co.uk/news/1150466/asa-rejects-real-bread-campaign-claims-allinson-misled-consumers/

The ASA runs a highly effective system of advertising regulation but in general they try to avoid opening the can of semiotic worms that is implicit meaning in advertising, preferring instead to focus on the literal and verbalised meanings of ads. In this case, the ASA rightly point out that Allinson, or rather their agency,  M&C Saatchi, do not explicitly claim to use Victorian production methods. However, my point is that the ad obviously seeks to arrange images and text in a highly suggestive juxtaposition, most clearly in the picture of hands kneading dough next to the words 'Allinson Today'. The ad tells no lies, but it betrays the brand's positioning strategy, which is to invoke the history and tradition of the brand. The RBC argues that Allinson in fact uses modern scientific production methods, and therefore lacks the connection it implicitly claims to have with the healthy integrity of Thomas Allinson's hand made bread.

The ASA argue that consumers ought to know very well that this suggestive juxtapostion is mere puffery, and not to be taken seriously. And they have a point, because if we start to look critically at the symbolic or implicit meaning of advertising, where will we end up? Advertising relies on polysemy, that interpretive space between literal truth and imaginative fantasy. Marketing in general, to a great extent, exists in that space. Without the scope to invoke the consumer imagination, marketing and advertising would be dreary and prosaic things, and consumption a grey, functional business.

Yet there have been times when issues of public health were judged so pressing that the ASA has indeed ruled on implicit meaning, in cigarette and alcohol ads. Cigarette ads never explicitly claimed to make smokers indpendent, masculine, powerful and sexually attractive. they just implied it, yet they were banned. Alcohol ads in the UK were subject to a new code of practice (in 2007) because they allegedly, implicitly linked drinking with social and sexual success. Many lobby groups don't think the limits on alcohol advertising have gone far enough.

The thing is, obesity and related health issues have reached a crisis in the UK and elsewhere, and implicit (and sometimes explicit) claims made by the processed food industry about the healthiness of its food are at the centre of this problem. So is it time for processed food brands to be held accountable for the ways their positioning strategies are articulated in advertising creative strategies?

This is a shorter version of this story