In Honour of World Toilet Day, by Robin Canniford

(This post is reproduced from theconversation.edu.au and was written by Robin Canniford of the University of Melbourne and follows from this article) 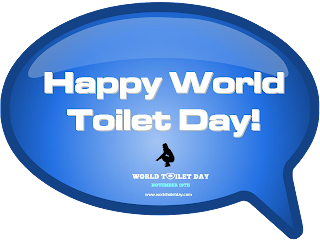 Bodily waste can be an embarrassing subject, but one that most of us can avoid thanks to efficient toilets and sewers. Nevertheless, this embarrassment may be holding back improvements in sanitation where they’re needed most.

Over the course of your life you might spend three years in the bathroom and a considerable proportion of that time on the toilet. Yet, here is an activity widely regarded as so distasteful that, unless you’re a parent of a potty-training child or involved in a caring profession, your conversations on the subject are likely to be short and rare.

When we in “developed” nations do talk about bodily functions, we often do so through euphemism and metaphor. Consider the commercials in which a canine protagonist is draped in lengths of toilet tissue to illustrate the twin pillars of softness and strength.

Perhaps this is only natural. After all, a more literal representation of toilet paper in use would be less appealing than the symbolic alternative offered by an ever-young Labrador.

There’s nothing exactly natural about our aversion to talking about bodily waste however. Indeed, the historical sociologist Norbert Elias found that our relationship with bodily functions has become increasingly layered with distaste since the late Middle Ages.

Elias also noted that the shame around bodily functions, and the subsequent desire for privacy in the toilet, predated the emergence of scientific and political concerns over hygiene.

I don’t deny that the discoveries of bacteriologists and the rise of hygiene as a social ideal boosted the case to construct sewers and toilets. Nonetheless, sanitary concerns of waste removal don’t explain why we design buildings and rooms to separate toilets from all other architectural purposes; draping a veil of secrecy over our bodily functions.

Neither do concerns over personal cleanliness explain our anxiety when privacy in the toilet is disrupted. Consider what makes you nervous or embarrassed in these contexts: Is the presence of someone in the next cubicle distracting? Have you ever put down a layer of toilet paper to silence things just a little?

If the answer is no, then good for you: you’re free from centuries of emotional conditioning. Make no mistake though; the phenomenon is of enough concern that products exist to cover up our, erm, noisy movements.

Toilets and the treatment of bodily waste are important psychological and cultural concerns. Slavoj Žižek goes so far as to clarify the different features displayed in German, French and Anglo-American toilet conduct before illustrating how these compare with national character and philosophy.

In line with the anthropologist Mary Douglas – who argued that excreta can symbolically defile cultural space – serviceable cubicles, toilets, drains and sewers all uphold personal experiences of social and spiritual order. They are widely considered to be markers of civilised society.

Equally, however, by separating us from one another while we make a deposit, and by effectively sucking away the offending materials, toilets reproduce our embedded thresholds of embarrassment and shame. The “civilised” citizen is conditioned to flush and forget that which is unwanted.

Beyond the borders of wealthy nations, four in every ten people have no access to a toilet or latrine, and instead they must defecate in public spaces, exposed to contaminates left by those who went before them. As a result, more children under the age of 14 die from diseases associated with poor sanitation than AIDS, malaria or tuberculosis combined.

While movements such as Sulabh and the World Toilet Organisation seek to raise money to build public toilets for people with little or no access to functional sanitation, they often find it difficult to attract public support because of a general lack of willingness to converse on the subject of bodily waste.

What can we do to redress this concern? Well, for starters, perhaps we should just stop being so embarrassed, and think more clearly about waste and its disposal.

If you consider it for a moment, squatting at the head of thousands of miles of sewerage systems before emptying the food that your body has processed is a minor miracle.

Why not bring this up in conversation with your loved ones over dinner tonight? No? Well at least spare a thought for those who don’t have the privilege of forgetting the subject.