Review of Sounds of Capitalism by Timothy Taylor

Review of The Sounds of Capitalism: Advertising, Music and the Conquest of Culture by Timothy D. Taylor. Published by University of Chicago Press. 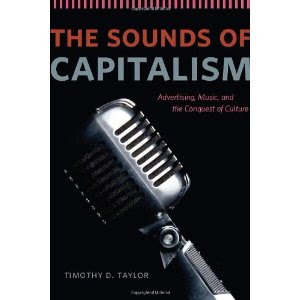 Sounds of Capitalism presents an impressive history of a near century of use of music in advertising in the United States of America. Beginning with early radio days when advertisers had to innovate how music could become commercially useful, Taylor brings us to contemporary practices of licensing existing music for big production advertisements. Ultimately Taylor argues that not only has music remained central to advertising but more over, music in advertising plays a fundamental ideological role in shaping consumption patterns. Taylor’s work engages directly with Thomas Frank’s influential Conquest of Cool and argues that such is the institutional overlap between music and advertising that we might be better served by understanding advertising as having conquered culture itself. In such a condition of correlativity, Taylor argues that there is no longer meaningful difference between popular culture music and advertising music and that this collapse renders distinctions between art and commerce moot.

Frank’s Conquest of Cool, published in 1998, sought to counter popular understandings of advertising as a cultural practice that appropriates and co-opts counter-culture, re-directing it towards its own preferred logic. By examining the practices and narratives of Madison Avenue advertising agencies during the 1960s, the very period now depicted in Mad Men, Frank demonstrated a greater institutional co-determination between popular culture and advertising. Many advertising practitioners were actually self-identifying participants in the counter-culture and sought to incorporate, rather than appropriate, the vim and verve of youth culture. Hence a sort of hip consumer culture follows with highly influential advertisers like Bill Bernbach ingeniously inscribing insurrectionist vitality into campaigns, redefining the Volkswagon Beetle from the Nazi car to the hippy car along the way. From this point on, advertising could be regarded as in the business of the conquest of cool. This argument has inspired a host of follow-up influential studies such as Holt’s How Brands Become Iconcs and Heath & Potter’s popular Rebel Sell. Taylor addresses Frank’s argument and argues that not only has the ability of popular music to signify cool and hence consumer lifestyle been conquered, but such is the degree of institutional fluidity that advertising has come to saturate and drive popular musical production. In other words, music’s significability is conquered but so too has the content of popular musical production.

One of four jingles Linda November had to sing one day

In this regard Taylor’s text is a study of the ideological mechanisms through which capitalism props up and reproduces itself. This is interesting for subject areas like Macromarketing and Consumer Culture Theory which arguably reify capitalism by systematically preferring neutral terms like ‘markets’. Taylor reminds us that the very idea of consumers and a culture predicated upon consumption is something that had to be imagined and brought into being. Hence the consumerist propaganda of advertising figures such as AJ Thompson (previously analysed by Schwarkopf) is regularly brought to bear as the ideological purpose behind the advertisements is revealed. Interestingly Taylor has little interest in knowing the actuality of how music and advertisement intertwine but instead prefers to observe the cultural changes as described in the many interviews he conducted with advertising legends and the quotations that he pulls from industry magazines. The point for Taylor is not to know what happened but rather to interpret the ideological representations of what happened as depicted by the most active agents.

Nonetheless for those who are interested in the history of music and advertising, a fascinating subject in itself, this is a book that does not disappoint. For example we learn in colourful detail about early radio sponsored programmes that presented classical recitals in the hope that this would generate goodwill from prospective buyers. As the form changes, we learn of successful jingle singers like Linda November who sang the iconic Meow Meow Meow Meow Mix jingle, as well as three other jingles in the same day! We learn of such characters as the J’s With Jamie; wealthy harmonists beloved by agencies because of their ability to sing with perfect diction. We also learn how many well known musicians worked in the production of ads, like Barry Manilow who worked for years as a jingle writer (and who used to sing a medley of his jingles to huge applause during concerts) whilst Herbie Hancock, Carly Simon, Hoagy Carmichael and many more besides also worked in the profession. Taylor demonstrates the shift in practices which sees musicians working as hired studio hands and jingle composers to Sting freely licensing his song Dessert Rose and appearing in an ad for Jaguar. Sting solicited such exposure partly because he had correctly anticipated that this would boost the sales of his album but also, more interestingly, because he realised that the aesthetic of the song’s video was already commensurable with an advertisement. Such transitions encapsulate Taylor’s arguments regarding the conquest of culture.

Taylor develops a derivative theory of Bourdieu’s so-called New Petit Bourgeoisie who were ambivalent about legitimised forms of culture and preferred avant-garde. Accordingly Taylor argues that post-Baby Boomer advertisers are ambivalent about consumption and advertising and claim legitimacy by redeeming advertising through producing more culturally worthy content. It is precisely through navigating this ambivalence, Taylor argues, that the dialectical fuel necessary for a consumer culture is ignited. In this way we can see the important ideological function of the constant institutional interchange between music production and advertising. Arguably at least more than the germination of such an argument was already present within Frank’s seminal text and the extent to which it is true to say that Taylor actually extends Frank's Conquest of Cool argument is perhaps less compelling than presented. Like Frank, Taylor’s history is shamelessly US-centric and hence totally ignored are seminal advertising campaigns and innovations from other countries, such as UK’s Bartle Bogle Hegarty's Levis campaign in the 1980s. Alas given the paradigmatic nature of such non-reflexive US-centricity, it seems unfair to even mention this as a flaw.

For a text that begins by promising an Adornian inspired analysis - albeit with the usual dismissal of Adorno as pathologically elitist - little is said about the content of the music itself and how the ideology is musically incorporated. By reserving the right to theorise popular culture production as determined by advertising as a matter of capitalist ideology but also claiming the right to dismiss Adorno's dialectic of preferred modernist music that might offer a counter-balance as elitist, Taylor both has cake and eats it. Indeed more dialectical thinking might have been well served; by the end of the book a reader might legitimately ask - given how musicians are paid enormous licensing fees for advertisers to add promotional and sometimes aesthetic value to their music - does it not make sense to flip the argument and insist that it is the musicians who have conquered advertising and have succeeded in turning advertising into a medium for their own promotion and enrichment?

In any case Taylor’s book presents an excellent account of the convergence of record label, advertising agency and brand and seriously sets about the task of understanding this as a manifestation of capitalist ideology. As such this is a text that contributes to our understanding of advertising history, the history of popular music as well as our general understanding of how art and culture exist ideologically within the culture industry. Sounds of Capitalism is a welcome addition to the literature and is hereby recommended.
Posted by Alan Bradshaw at 11:36