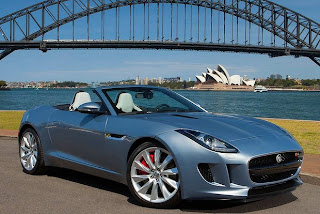 Jaguar's new viral movie, supporting the launch of the F Type (above), follows a tradition of 'content' marketing in the prestige car business begun by BMW a decade ago. The twelve minute film called ‘Desire’, made by Ridley Scott Associates (story in Advertising Age ) stars Homeland actor Damian Lewis, and features a specially commissioned song by Lana Del Ray. The plot unwinds as a car chase across a Chilean desert, with Lewis acting the Good Samaritan (with advanced driving skills) to a woman escaping her criminal husband. There's a neat twist at the end, but no promotion, as such. The car speaks for itself. Its an expensive piece of product placement, without the need to haggle over creative control. Desire airs through video sharing on social media, principally via YouTube. BMW set the tone for this kind of car-caper content with their 2001 movie The Hire, starring Clive Owen and Madonna, with Guy Ritchie directing (see it here ). The Hire was initially sent out on DVDs and had to be put on social media by keen fans, while Desire is a purely social media phenomenon. Both efforts epitomise the focus on content that is the new frontier for marketing in the convergence economy.
'Content' is a catch-all term for entertainment or news that features a brand. If this seems a nebulous definition, that's because content can cover many things. The connecting thread of all marketing content is that it doesn't look like traditional advertising, because there's no sales pitch. There is, though, a promotional motive. It is by no means confined to car brands. Coca Cola, for example, made their content marketing strategy into content by putting a video of it on to YouTube (see it here ). The aim is to strengthen the brand's cultural presence by activating and engaging the audience.


Content doesn't have to be a movie. It could be a journalist writing pieces for a brand blog, a game designer making free-to-download 'advergames' for a brand, or a digital ad agency creating memes to leverage social media sharing from topical news events, as Oreos did successfully during the Superbowl power outage a few weeks ago. It could even extend to forms of sponsorship or product placement that spin off into PR coverage or consumer-generated memes. If a product placement in a TV show happens to be on a clip that gets viewed by millions, that's content.

There are two things I particularly like about content as an idea that articulates consumer marketing practice in the convergent economy. One is that it gets beyond the spurious categorical precision that is so common in marketing, and offers a unified notion of brand presence in promotional culture. The other is that it represents the best things about marketing: great writing and visual creativity, and in so doing it moves away from the dull cognitivism and behaviourism that, still, dominate static marketing thinking.

The notion of content is sweeping marketing from all directions. A great deal of advertising is looking more like entertainment in its narrative forms, while much entertainment looks like an advertisement so packed is it with prominent brands. Even news coverage is increasingly tinged with marketing influence, because of the need for news media to position themselves as brands in a shrinking news market. Note the UK's most profitable news media brand of all, the MailOnline, which earns its 100 million readers per month not from a commitment to information, nor, arguably, to political posturing, but to the sensational story arc. This is news as marketing, positioned not against other print newspapers but against popular showbiz and news sites like MSN. Other news media are so strapped for cash flow they are over-reliant on PR releases and news agency material to fill their space, allowing marketing spin to seep through into editorial on a huge scale.
Media convergence refers to the development of hardware and software that can show all media content on the same device. Leading ad agencies now employ digital planners to show them how creative ideas might be adapted across media channels. At the moment, it is creatively and technologically difficult to make a short video for TV that also works on mobile and internet, and translates to static forms like print or banners. Promotional logic is not longer static, with a defined audience targeted by an announcement from one, identifiable, source. The logic is dynamic, with branded content driving activation through different media channels and generating new iterations of creative ideas from audience participation. For example, Heineken's brand placement in Skyfall was said to have cost scores of $millions because of the extended activation through linked TV ads and digital content built around the exposure. In the future, the technical issues may be solved and we will access all media on a single device, making content marketing even more accessible.
There is a recognition in the notion of content marketing that the most powerful way to sell brands is not to sell them at all, but to normalise them as a taken-for-granted part of our cultural experience, while, at the same time, infusing them with value through the narrative forms and visual drama of media technology. The idea of 'content' marketing mashes media genres into a seamless branded experience of  media consumption.
Naturally, this blogpiece is also a piece of branded content, since a nice book has just been published by Routledge dealing with exactly this topic. Called Promotional Culture and Convergence, and edited by Helen Powell at the University of East London, the book takes an academic purview of the implications for marketing of convergence culture. Another book on the re-shaping of marketing in the convergence era will appear later this year. This one is from Palgrave MacMillan and will be called Marketing In Context. It'll be a more practitioner-focused perspective, taking in the scope of marketing but addressing the much under-played role of communication in promotional logic. The viral movie of the book is still under development.
www.chris-hackley.com