Note in addition to being awarded the prize for Best Dissertation, Tracey also successfully applied for a scholarship for a PhD at Royal Holloway, which she is now pursuing.

Even from the start of my MA Marketing course at Royal Holloway, University London, the prospect of writing a 12,000-15,000 word dissertation loomed in the ever distant horizon in quite an antagonising way. Was it a possible feat? Or would I crumble somehow at the last hurdle? Just the mere fact that it engulfs a whole summer term is credence to how challenging it would be and notably how crucial it was to my MA marketing course overall. It was definitely not something to be taken lightly! However during my Postgraduate year, as days and then months passed by, ever growing closer to the ominous summer term, no one was quite more amazed than I that my anxiety of writing a 12,000-15,000 word dissertation somehow turned into glee. Although it was not realised at the onset, as I progressed with my course, it began to slowly settle in that as a MA Marketing student at Royal Holloway you are not suddenly thrust into completing a dissertation at the onslaught of summer term. Rather you are thoroughly and deeply guided into it, making it significantly easier to comprehend and get to grips with. Not only does your assigned supervisor for your dissertation assist you every step of the way, but it can also be reasoned that every prior marketing module undertaken before your dissertation, is designed to cater to the finessing and harnessing of a suitable research topic and research method for your dissertation. Consequently once I overcome the initial fright, I was able to focus more, not on the challenges ahead, but the excitement of being able to choose whatever research topic, question and method I wanted, that would best allow me to thrive and achieve academic success. 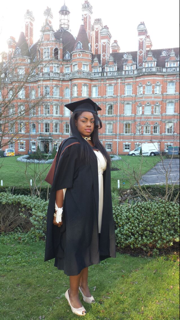 It is no surprise that completing work on such a grand scale requires a real passion for the topic chosen to explore. Marketing encompasses a broad depth of areas and I believe strongly that everything in some way or another can be related back to its broad concept. Subsequently I chose to work from ‘the outside in’ whereby I found a theme which I loved and then looked for areas in marketing that could encompass such theme. Of course there was also a plethora of more standard marketing topics which were available for me to choose from, helpfully explored in great depth during the various marketing modules I undertook in the autumn and spring term. However when it did actually become time for me to seriously consider and craft my research topic; the best thing to do was research… research… research! A well thought out and suitable research question is not going to just fall on your lap. It requires gaining deep insight into your desired general topic area and thus my advice for anyone about to undertake a dissertation would be to think carefully about the topic you want to spend 3-4 months researching. From discussing with further students when I undertook my MA course, it seemed apparent that picking a general topic did not reap as much benefit as when students challenged themselves with their topic and pushed the limits.

After extensively exploring all the options available I chose to take a socio-cultural approach to marketing when formulating my research question. Namely I chose to explore the socio-semiotic gendered nature of contemporary romance novels as tools of marketing and whether and to what extent patriarchy is still the overarching theme within them. This research built on previous research findings concerning the gendered nature of romance scripts in popular culture and used thematic analysis in exploration of the gendered socio-semiotic constructions of Harlequin romance novels.  I chose to explore contemporary popular romance novels as they represent one of the biggest sites for the representation of individuals as gendered subjects.

I was relieved that I was not bound to the first research question I came to develop. This was because during my research, many new and exciting themes of exploration began to stand out to me which called for further exploration. Namely it became apparent that more ‘guised’ forms of patriarchy namely; ambivalent sexism, bigendered subjectivity and phallic symbolism were prevalent in romance scripts. Thus further exploration was needed to determine whether recent challenges by academics as to the patriarchal nature of contemporary romance novels was distorted owing to such novels continued unconscious expounding of patriarchy in light of many un-explored gendered ideologies. It was clear from my research that there seemed to be a vehement acceptance by academics of patriarchy in such novels without appreciation of the manifest attempts of romance novels to reconcile the hero/heroine dichotomy with society's changing attitudes about gender. Specifically such 'skipping over' by academics of the nuanced albeit 'misleading' feminist thought within such novels meant that much of the previous research within this field was unable to adequately challenge contentions that oppose the continued prevalence of patriarchy within them. Thus it was crucial that my research question allowed for a more critical understanding of the hero/heroine dichotomy in such narratives by having recourse to more micro patriarchal theories which would enable the materialization of a framework of patriarchy.

Inevitably, I was constantly revising my research question, of course with the approval of my supervisor and as long as it did not stray too far away from my initial proposed research question. In the end my analysis found that a practice of symbolic annihilation in relation to the heroine's mention in romance titles was a prevalent concurrence wherein which the heroine was given an unimportant relational status in comparison to the hero's dominant status. The descriptions of the hero in such novels were also found to be congruent with patriarchal theory in the form of phallic symbolism as the males anatomical organ was consistently represented as a symbol of his physical dominance. Finally findings showed that within the narrative structure the heroine was allowed to assume a relative level of independence at the start of such novels, mainly through her assuming of bigendered practices. However such practices as well as the hero's ambivalently sexist practices against the heroine eventually came to devalue her positioning further.

I would suggest to those about to or in the process of writing their dissertation to fully submerse yourself in your chosen topic in absolutely any way you can. Notably as soon as you have a rough idea about the topic, it won’t hurt to begin to do exciting things revolving around it. For example I knew quite early on in the year that I wanted to look into patriarchy and thus developed a keen interest in watching films and reading books which portrayed family dynamics with a strong presence of male-dominance within them. Engaging in fun actives such as this really helped in making my dissertation not something too onerous, but rather a fun and exciting process. In light of this,  I must concede that although my MA Marketing dissertation was possibly one of the most challenging tasks that I’ve ever had to complete and certainly the longest academic piece of work I’ve ever had to submit, it was also the most stimulating and thought-provoking written academic task. I was also privileged to be awarded best MA marketing dissertation in my graduation ceremony.