Is a cigar more than just a cigar?

In 1923, Sigmund Freud - founder of psychoanalysis - was diagnosed with a serious case of oral cancer, which would eventually prove to be fatal, caused by his constant cigar smoking. While the link between cigar smoking and cancer was not clearly established at that time, Freud was well aware that his cigar habit was damaging his health. For example, in 1894 Freud was diagnosed as having nicotine poisoning that was causing chest pains and ordered by his doctors to stop smoking. Yet the withdrawal caused him to experience the 'horrible misery of abstinence' and he abandoned his efforts. Interestingly at the same time, he and his wife had also decided, after having five children in six years, to abstain from sex yet unlike abandoning his cigar habit, he found this latter form of abstinence more readily achievable. 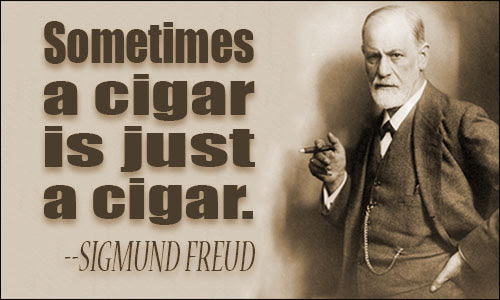 Perhaps in denial of the seriousness of his lesion, Freud arranged for an operation to be conducted at an outpatient clinic by a non-specialist – a traumatising procedure during which Freud haemorrhaged and almost bled to death. The operation consisted of the construction of a prosthesis that separated the oral and nasal cavities, and Freud wore it for the rest of his life and it remained a persistent source of torturous pain. For the next 16 years of his life, Freud underwent more than 30 operations on his throat and despite the great pain involved in opening his mouth wide, he constantly underwent excruciating throat inspections. Even then, his pain seems to have been induced and acerbated by his constant smoking yet Freud did not attempt to give up his habit. As his biographer, Gay, describes it ‘The pleasure that continued smoking gave Freud, or rather, his incurable need for it, must have been irresistible. After all, every cigar was another irritant, a little step towards another painful intervention’.

Freud declared that smoking was ‘one of the greatest and cheapest enjoyments in life’ and the development of psychoanalysis unfolded under a constant cloud of smoke. Though accepting that his smoking habit was a ‘vice’, Freud noted that he relied on cigars to help him concentrate and focus on his work. At the weekly meetings of psychoanalysts held in his apartment, from which the practice of psychoanalysis came to be formalised, there was considerable smoking; as one witness attested, the room ‘was still thick with smoke and it seemed to me a wonder that human beings had been able to live in it for hours, let alone to speak in it without choking’.

May be traced to an origin of the most innocent kind. It only repeats in a different form a situation in which we all once felt comfortable – when were still in our suckling days.. and took our mother’s (or wet nurses’s) nipple into our mouth and sucked at it.

In terms of object relations, Freud argued that when a loved object is lost, a form of pathological mourning may take place in which the person identifies with the first stage of object choice. “The ego,” he states, at this stage, “wants to incorporate this object into itself, and in accordance with the oral or cannibalistic phase of libidinal development in which it is, it wants to do so by devouring it”. This constant need to devour the absent loved object can lead to forms of oral addiction, such as excessive sucking or drinking, or indeed… smoking.

That a cigar looks so similar to a penis leads to an obvious interpretation of sublimation and Freud accepted tobacco smoking as a form of sublimation: in 1897 he told a colleague that tobacco addiction substitutes for the “single great habit, the ‘primal addiction,’” masturbation. Yet this thought was never developed into a paper and he steadfastly declined to interpret his own cigar smoking as a form of oral addiction, or as expression of latent homosexual impulse; he famously responded to a colleague who pointed out that cigar smoking is clearly a phallic activity; ‘sometimes a good cigar is just a good cigar’.


Some theorists have argued that Freud’s cigar smoking ought to be understood as representative of an unacknowledged (and therefore unresolved) oral need. Freud’s own inability to recognise his oral addiction may have lead to Freud opting for certain forms of interpretation where others may have been possible. For example, in Freud's famous dream of Irma which was the starting point for his book the Interpretation of Dreams where psychoanalytic theory was first formally introduced, the dream begins with Freud and a colleague peering down Irma's throat. As Madelon Sprengnether was to note ‘it’s as though Freud’s dream had turned to nightmare – one in which he was condemned to play the role of Irma until he died’. Yet Freud’s own interpretation of the dream about Irma’s throat emphasised his masculine anxieties concerning professional mastery. In the light of his eventual experience where his own throat came to be excruciatingly gazed into over and over: may we speculate if Freud’s dream may have consisted of an identification with Irma which did not occur to him due to his own strength of repression? As his biographer, Gay puts it, ‘plainly there were depths to his mind that his self-analysis had never reached, conflicts it had never been able to resolve’.

However a deeper conundrum emerges in Freud’s own refusal to recognise his cigar habit as a phallic activity representing an oral addiction. From a consumer behaviour perspective, what are we to make of Freud's claim that a ‘sometimes a good cigar is just a good cigar’? If psychoanalysis is to be understood as a method in which we see everything as being "really" something else,  a subject that is grounded on understanding transferences, projections, associations where meaning constantly seeps from one object to another, then where are the limits of interpretation to be found? From this starting point, what does it mean to insist that a cigar is really just a cigar?