The Value of Scholarly Values

At Royal Holloway we typically emphasise a teaching and learning experience that is both critical and fundamentally scholarly. We see the study of marketing as an intellectual affair and we expect no less than intellectual scholarly engagement from our students, meaning that we expect you to read a significant amount of literature, to be open-minded and to be willing to think, discuss and write at a level that is both abstract and non-utilitarian. For students expecting vocational training for a career in marketing, this can be frustrating and even exasperating. However in this post I want to argue the case for why such an approach is the best way to go. 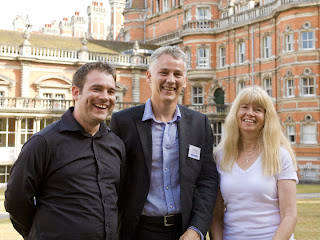 Bradshaw, Hackley and Maclaran all use critical approaches in their teaching at Royal Holloway
Marketing occasionally mirrors a classical economic discourse of free markets hence the marketing toolkit, as developed across textbooks, is never held accountable for market failures. Rather failures of implementation are pointed towards; a lack of marketing research, a lack of consumer focus and so on. Whilst there may well be an element of truth in such claims, there is also the current spectre of failure that hangs over western corporate practice marked by the spectacular collapse of markets in 2008 and a severe recession that continues through the present. The market collapse was brought about by several of the highest paid executives, in other words at that very highest level of corporate enterprise we are left with a stark impression of not just business failure but worse, even massively destructive criminal neglect. How many of the business models thought at university business schools are implicated in this failure and neglect? Which models should be discarded and which should be retained? In other words, what and how do we think when the models that we have been thought to think with turn out to be flawed?
At moments like this the value of a critical dimension becomes clear. To teach students business models, but not to teach students how to critique those models and to think beyond them is to only do half the job. The intellectual project of critique goes deeper, of course, than merely adapting and improving managerialist models but extends to macro questions that can range from the political economic, the ethical, the historical, the aesthetic and so on. As a European college we tend to draw upon the rich history of critique that includes German critical thinking and French post-structuralism however we encourage students from outside Europe to enliven, enrich and deepen inquiry by bringing with them their own theoretical traditions. Lastly it must be stated that, in contrast to merely memorising managerial models, a critical education never ends and hence we want to equip students with a critical curiosity that will leave you reading and thinking about these issues for the rest of your lives.
Therefore we want our students to approach the MA Marketing at Royal Holloway not as a process designed to equip them with a qualification that will add value to their career prospects, but as a place to spend a year embedded in rich ideas and discussions.
In short we are not looking for business school customers, we are looking for university students. Are you willing to make the journey with us?
Posted by Alan Bradshaw at 10:41