Looking for something marketing-related to read on holiday?

If you are thinking about reading something marketing related during your Summer holiday but want to avoid dense theory or anything too managerial then I recommend Stephen Brown's trilogy of novels in which he parodies Dan Brown. So the series begins with the Da Vinci Code re-written as The Marketing Code, Angels & Demons becomes Agents & Dealers and finally The Lost Symbol becomes The Lost Logo. Last year Stephen Brown addressed the Royal Holloway Marketing Camp with a spectacular and glorious pyrotechnic talk entitled "Sex with Philip Kotler". Here is a review that I wrote for the second installment, Agents & Dealers. 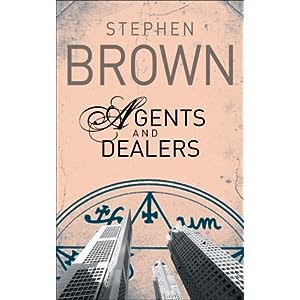 Stephen Brown is leading a revolution in marketing writing. Following from the so-called crisis of representation which saw marketing knowledge presented in the form of poetry, films, dance and music, Brown suggests that the remaining logical step is to present ideas about marketing and consumer behaviour in a truly novel form; the novel itself. Not only will this novelisation of knowledge lead marketing scholars away from an erstwhile destiny of producing unreadable journal articles, but it is also submitted as a welcome alternative to boring textbooks that fail to capture our students' imagination and also, as it is noted that business people tend to buy both business books and murder best sellers when at airport bookshops, an attempt to reduce the volume of hand luggage in business class by synthesising fast-paced thrillers with marketing scholarship. If marketing is a world alive with adventure and not a dull white-coated science, the challenge that Brown sets for himself in Agents & Dealers is to replace the bullet-points with bullets. What follows is part two of his soon-to-be-completed trilogy, all written as parodies of the works of one of the great marketing successes of our age, Dan Brown. Just as the Marketing Code was a parody of the Da Vinci Code, this time round its prequel Angels & Demons is re-worked as Agents & Dealers.
Those familiar with Agents & Dealers' sequel the Marketing Code which raised issues of marketing theory in the form of bizarre Dan Brown rituals and conspiracies, will be pleased to read the return of the larger-than-life uber-Scot Professor Pitcairn Brodie and his anti- man-of-action hero PhD student, Simon Magill not to mention the Jewish-Protestant freedom-fighting cynical profiteer that is King Billy. However, added to Brown's burgeoning cast are the unlikely femme fatale, Abby Maguire, whose life as a retail undergrad on work-placement is hurled towards the dangerous underworld along with her accomplice, the lead singer of the Goth band Love Pump cum high-camp marketing lecturer from the University of Hustler, Dr. Dave "the Rave" Kelley. Together these characters, sparkling with sexual tension, are forced to match their wit against double-agents and double-dealers amidst the distinctly Irish Priory of Ryan and WB Yeats lead conspiracy. We find the protagonists wrestling with the Citroen transformer robot in the streets of Nuremberg, scamming through Edinburgh, caught in a shoot-out in a Belfast monastery, horse-whispering in the Irish midlands of Mullingar and just about finding salvation through sex-toys in an adult shop in Carrickfergus.
For keen Stephen Brown readers, this is the book where the master of marketing slogans achieves what must surely be his apotheosis as he finally and inevitably unleashes his idiosyncratic imagination on naming sex products and promotions ("buy-one-nipple-clamp-get-one-free" and an "auto-erotic extravaganza in no-partner November"). To be sure, this is the book which takes a turn towards the ribald. Beyond references to Rudolph-the-Red-Nosed-Rabbit we also find a rape scene, paedophilia and castration. No doubt about it, this is a textbook with edge.
There is also a great depth to the research for this novel. Hitler's (dubious) Irish connections are mined to create a Nazi conspiracy that threads together Otto Skorzeny with Eamon De Valera and WB Yeats. The attention to detail and commitment to authenticity are nothing short of extraordinary and Stephen Brown actually pens a trio of fake yet carefully-crafted Yeatsian three stanza ballads which, it transpires, are actually a code connected to the streets of Edinburgh. Now that is impressive and that same level of ingenuity (for how else can it be described?) flows through the imaginatively wonderful conspiracy plot throughout these pages. And just like he did in the Marketing Code, Brown succeeds in matching Dan Brown's own propensity for page-turners.
Agents & Dealers smuggles nuggets of marketing theory throughout the pages. Brown's well-versed argument that marketing is not a science but a wonderland of enchantment in which marketers are alchemists and even crazed fanatics is, once again, laid to bare. But as a master code craftsman, the references to marketing are so embedded in the attention consuming narrative that they can be easy to miss. For example, Brown reveals whilst recently writing for the Irish Marketing Review that the discussion between two characters as they decide where they shoplift, is actually a meditation on the problematic process of market classification. This may well result in a sense of less of a takeaway for marketing theory than is found in the Marketing Code but this is surely forgivable given the quality of conspiracy that is conjured.
At a time when critical perspectives seeks to deliver the imaginative and creative away from conventional marketing, Brown is intent on seducing us all back by reminding us that conventional marketing is anything but conventional but is a rich and fertile field for the creative to farm. Agents & Dealers, as part two of Stephen Brown trilogy, would take our imaginative and creative curiosity for understanding marketing to untold places. It is a journey worth taking.
Posted by Alan Bradshaw at 02:20