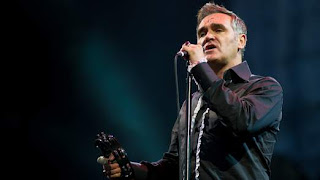 80's pop star Morrissey has earned national media coverage this week for his view that the London 2012 Olympics media coverage reminds him in it's tone of the nationalistic propaganda of 1930's Nazi Germany http://news.sky.com/story/969426/morrissey-olympic-spirit-like-nazi-germany

England, he says, is "foul with patriotism". Morrissey, also a vitriolic anti-royalist, is well-known to be a professional curmudgeon. His talent for contrariness keeps him in the public eye, and a lot of people still buy tickets to hear him recycle his old hits. Nonetheless, he is probably expressing views that are held by many others, but can gain no traction amidst the waves of Olympic self-congratulation currently swamping UK media.

On this point, Morrissey and I diverge. Born in the same year as me, the lachrymose lyricist's lilting laments have never been far from my ear. His unique brand of misery is wrist-slashingly compelling, although frankly if he'd never met ace guitarist Johnny Marr I doubt that Morrissey's moans would have reached much of an audience beyond his bedroom.

I am biased, I admit. A sports nut all my life, I love it, and the media coverage now is an armchair sport's fan's dream. In my childhood sports media coverage was truly rubbish, with the exception of the rugby internationals and Bill McLaren's great commentaries. I had a few hours on a Saturday afternoon to listen to TV announcer Frank Bough (born in my home town, Frank knew how to party) as he read out football scores from a mechanical typewriter. Yes, this was TV before Sky Sports. Then I had to wait 24 hours for print newspapers to be delivered to our house find out what had actually happened.

Today, I'm in HD, 24/7, real time, wifi, armchair sportsfan heaven. The main tone I get from the peerless media coverage of the Olympics is not so much jingoism as bemused astonishment. We all really thought we were going to mess it up. Not only is everything going rather well on the organisational side, we're actually winning some medals too. This is the most GB has had to celebrate since England won the world cup in 1966. Why not have fun with it? To be sure, the Olympics is a platform for nationalistic ideology, and some of the competitors are pretty ruthless, even cheats. But it's a vehicle for other ideologies too, not least race and gender equality, friendship and meritocracy. 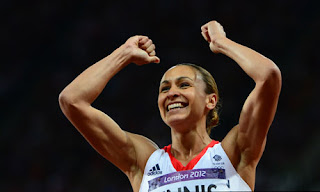 The GB team is a refreshing mix of ethnicities, colours and classes. I don't buy into claims that it is 'elitist', and I'm not sure what that means. One of GB's most eminent medal winners, Bradley Wiggins, grew up in a council flat in London after his dad left when Bradley was two years old. The GB team were not cherry-picked for stardom when they were 6. That just isn't how it works. They're dedicated club athletes who put more into the sport than they take out of it. Most are not wealthy by any means. To be sure, some sports have a disproportionate representation from elite fee-charging schools, notably rowing. But the sport itself isn't exclusive. People's choices are framed by their environment. If you went to an inner city comprehensive rowing isn't the first thing on your sports & social agenda. Without doubt, the UK's investment in its school sports infrastructure needs to be much better. But cultural and class norms are more powerful than social or economic exclusivity in making sports participation uneven in the UK.

Meanwhile, I'm enoying it all in spite of Morrissey. Go TeamGB.