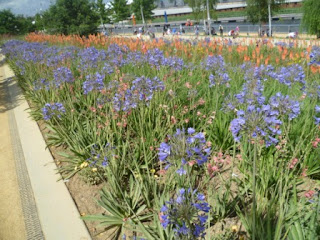 The main London 2012 Stratford site, a vast reclaimed tract of east London, greets the visitor with bright, energetic colours that includes vibrant recycled rubberised flooring, nearly fluorescent signage and the gaudy juxtaposition clashing colours, all strikingly fresh.  The river bank planting accentuates bright and strong use of colour, with prairie planting of yellows and blues, of bright peach red hot pokers set against striking purple blue agapanthus globes.  The bright red of the roller coaster like feature building, the imposing relief Olympic circles on the aquatics centre, its roofline inspired by the underbelly of a whale.

Acres of bill board space was either foregone or instead covered with one of the vibrant rainbow range of colours (with bright pink a signature colour, used prominently in signage) and the 2012 Headline font, described as distinct and quickly recognisable. (Observer, 2012) This feeling of unclutteredness contributed to a strong sense of place, neither city nor country, supported by happy, smiling and fun giving uniformed volunteers. 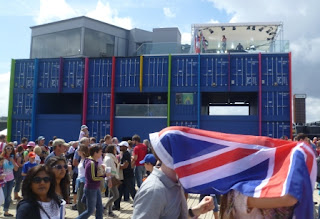 Even the BBC broadcasting centre in the park, which provided in-the-thick-of-it backdrops for smiling medallist interviews and sliver fox anchor feel-good interviews, was surprisingly anonymous.  Constructed, Lego like, using blue shipping containers with glazed voids and a roof terrace, highlighting strong re-cycling credentials.  Missing also were the blitz branded interview back boards, made popular by football post match interviews, perhaps forcing the unusual re-introduction of the hand held lolly pop microphone prominently sporting the BBC brand alongside the Olympic rings, all in yellow and the use of the plain yet colourful Olympic venue as the backdrop.

It was all a bit like wandering around Moscow, just after the communist experiment had been shown to fail, subtle signage, here and there, just enough to help guide you around at the points of ambiguity, but else, nothing.  A blank canvass, nearly. 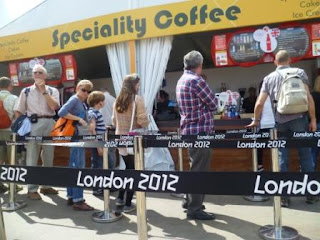 Generic labels adorned the various merchandising stands ‘speciality coffee’ where surely Costa, Nero or the ubiquitous green mermaid would be expected ?  There were Innocent branded wheeled carts (Coca Cola owned), but the roving young people wearing back packs emblazoned with the word ‘BEER’ took to holding up a specimen bottle, often Heineken, seemingly required to overcome the lack of information that is usually and usefully conveyed by a logo, symbol or brand name.  A feeling not unlike BBC Childrens TV, sticky tape not Selotape or Scotch, glue stick not Pritstick, double sided sticky tape not Blutack.  Brand identities expunged either taped or painted over. 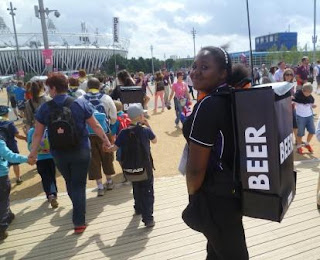 Clear and evident: a conscious rejection of one of the generally useful roles brands play.  For me, it created a rather unnatural world, a TV studio or film set that deliberately removes cultural advertising references to transform the audience to a different place.

The impact of the heavily controlled and minutely planned execution of this leading global event, which saw 10bn viewers for its opening ceremony and a third of the UK population tuned in to see Usain Bolt win the 100m dash, may well go on to help define an Olympic experience supported, but not dominated, by advertising sponsorship.