September  11 marks an important anniversary for on this day, 1903, the seminal critical theorist Theodor Adorno was born in Frankfurt. In addition to being a music reviewer and composer, Adorno has emerged as one of the key exponents of critical theory and a central figure of the so-called Frankfurt School, comprising of scholars associated with the Frankfurt Institute of Social Research that included Max Horkheimer, Walter Banjamin and Erich Fromm.

Whilst Adorno’s output contains several philosophic masterworks, such as Negative Dialectics and Philosophy of Modern Music, the Dialectic of the Enlightenment which he co-authored with Max Horkheimer during the 1940s, has become an exceptionally influential text that continues to cast a large shadow over how we understand consumption, markets and culture. Primarily concerned with understanding barbarity as entangled with enlightenment, the book’s chapter on Culture as Mass Deception analyses how mass culture results in a downward spiral of alienation that integrates people into a dominating system of production. Against a backdrop of rising fascism, Adorno’s work is constantly concerned with the idea of an imposed mass culture and how consequentially imagination, free-time and personalities become regulated in a routinised world. Essential to such a process is the willingness to participate and opt out of critically engaging with the world, a toxic ideology that discourages reflexive thinking and generates anesthetised being. Throughout Adorno’s work a model of an isolated intellect engaged in a constant process of hard work is marshalled against the world of de-concentration and mass culture whilst he presented a framework for analysing art and life in terms of how it could resist its own commodity structure and break an all but hegemony of discourse that has internalised a logic of production.
Adorno has attracted severe criticism for being elitist, for detesting jazz, for failing to recognise the subcultural possibilities in popular culture and for treating consumers as passive dupes who lack the necessary intelligence to live a meaningful life. Yet such critiques miss the mark: Adorno was the first major thinker to take seriously popular culture and subject it to philosophical questions and submit it to the same politico-aesthetic expectations that he would with classical music. Indeed to do any less would be the truly elitist act. An accusation of treating consumers as passive dupes neglects the central emphasis in Adorno’s work on how critical faculty is something which we are actively encouraged to switch off; lack of intelligence is not the issue rather our willingness to go along with a world where it is more rational to live irrationally. When the smoke of such critiques clear, Adorno leaves us with an analysis of consumer culture that not only pulls together various analyses such as Marxism and Freudianism but also helps to locate consumer culture within a broader schema that includes warfare and hatred and recognises many of the theoretical coordinates that attended the rise of fascism in Germany as also existing within mainstream popular consumer culture. Adorno’s voice, therefore, comes to us a warning against “advancing brutality”. 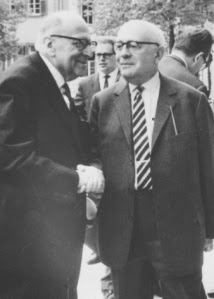 Adorno with his co-author Horkheimer
With the rise of the Nazis, Adorno fled to England and eventually to USA where the mostly Jewish Frankfurt School re-convened minus familiar faces, most notably Walter Benjamin who committed suicide in Spain just before the Gestapo could arrest him.  The sad life of the refugee and the conditions of mortification imposed upon he and his colleagues inform his personably written text Minima Moralia, an infamously difficult read but a text nonetheless loaded with reflections and insights from a gaze that shifts from the macro conditions of life under capitalism’s mass culture towards the everyday minutia where glances between metro passengers carry a deep poignancy and bear witness to profound alienation.
Returning to Germany, Adorno eventually found himself amidst the rise of 60s counterculture where his idealised form of the disengaged yet radical intellectual jarred with the impatient student insurrectionary zeitgeist. His relationships with students became increasingly strained and contentious and, arguably, the stress of the hostile encounters brought about his death following a heart attack in 1969, aged 65. There is always the temptation to romanticise Adorno’s life and death as a tragedy in which he was fated to perpetually suffer for delivering deeply unpopular messages yet such a simplified and clichéd reading would no doubt have been rejected by this committed philosopher and scholar.

- An excellent text which explores the impact of Adorno & Horkheimer's analysis for branding and consumer culture is provided in Lash & Lury's Global Culture Industry.
Posted by Alan Bradshaw at 23:36