“We Do Not Want to Be One of Those Neighbourhoods Where Starbucks Moves In...”

The popularity of ethical, green and political consumption and forms of consumer activism and resistance have grown considerably in recent years. Session 8 of the Marketing Ethics module (2nd term elective) discusses the phenomenon as it relates to: environmental degradation, the recent economic crises, questions of persistent economic growth, well-being and political projects that switch responsibility for social and environmental welfare away from governments and other institutional actors towards “consumer-citizens”. 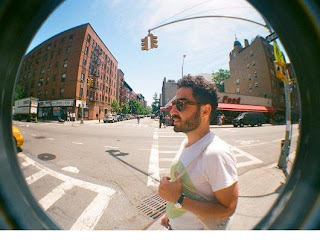 Andreas Chatzidakis teaches Marketing Ethics on the MA Marketing
However, although the intersection of consumption, ethics and politics has been of interest to a variety of disciplines for quite some time (such as geography, sociology and cultural studies), it is only recently that marketing academics have approached these issues from a broader and more contextualised perspective. Not surprisingly, marketing studies that examine topics such as Fair Trade consumption, sustainability and so on, tend to follow the dominant paradigm of marketing research. Typically, “ethical consumers” are assumed to be rational decision-makers who differ from other consumers (“unethical”?) only to the extent that they factor in social and environmental causes to their otherwise utilitarian, day-to-day purchases.

In an attempt to redress this somewhat de-contextualised understanding of ethical consumption, we (Andreas Chatzidakis, Pauline Maclaran and Alan Bradshaw) conducted an ethnographic project that investigates how space and place, typically overlooked contextual factors, affect consumer-related movements. As part of this project, we recently had an article accepted for publication in the Journal of Marketing Management’s special issue on “Green and Ethical Marketing”. In the article we draw on data collected over a two-year period in Exarcheia, a neighborhood of Athens renowned for anti-capitalist and anti-commercial ethos, and we probe its consumer-related movements. 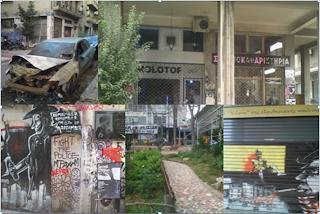 For instance, we found an anti-consumerist bazaar, where people could come and give goods, or take goods, or give and take goods, or share their skills and knowledge in a variety of weekly organized seminars. We found a collective whose mission is to contribute to an economy of solidarity by importing coffee from the Zapatistas in Mexico, squats that provide free legal advice and educational services to illegal immigrants, several community cooking events, and a guerrilla park: a space earmarked for a leased car park that was occupied and bulldozed by the locals and transformed into a very impressive park that operates on the basis of a gift economy and self-management. 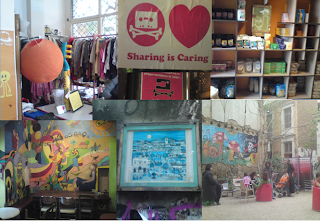 From a more theoretical perspective, we observed that despite this variety of (ethical and green consumption-related) social movements operating in Exarcheia and their diverse political aims, they remain spatialised. For example, living in the same place made an emotional impact: as an informant put it, “the air that someone breathes when entering Exarcheia” and a more cognitive impact in terms of being aware and cultivated into the political norms and traditions of the area. In addition, space/place acts as a destination and as a supportive environment that allows similar initiatives and movements to emerge. According to several of our informants, a sense of operating in the same area and having a related place identity felt, in many cases, to be a source of community and identity that paved the way for collective action. For instance, the widespread use of graffiti, insertions of artwork and table games in public spaces and the creation of guerrilla parks are not only acts of civil disobedience that encapsulate residents’ actions against the commodification and private appropriation of public space but also mark their ongoing attempts to live more communal and anti-consumerist lifestyles.

Altogether, what our research has so far shown is that there is scope for deeper conceptualisations of the (anti-)consumption of public space/place and the relationship between space/place and various public and private consumption settings. There is need to reconsider both the (ethical and green) consumption of space and place as, for instance, where residents reclaim public spaces and demand that ones’ neighbourhood does not become “...one of those where Starbucks moves in...” (in an informants’ words). The study also demonstrates that we should consider that ethical and green consumption occurs within specific spaces and that these spaces frame understandings of ethical and green consumption. For example, engaging in solidarity trading with Zapatistas in Exarcheia is a choice quite different from buying Fair Trade coffee in a big supermarket chain – let alone buying a Fair Trade frappucino from Starbucks.
Posted by Andreas Chatzidakis at 09:38